A wacky broughlike made for the Seven Day Roguelike Challenge of 2019.

Synopsis: Take Emmysaurus through 6 levels of THE PEN and use your SPELL WHEEL to battle everything from Jellies to Milk Bottles. Run for the exit or try to get a high score.

Your Spell Wheel has 4 spokes. Cast in one of the cardinal directions to activate one spoke. Each power on the spoke corresponds to a tile on the map itself and they are activated in order until hitting walls. Each power enhances the current spell and spells can branch into different paths, evolving independently.

Vending Machines: You can attack vending machines to get candy. Candy heals you or gives score if you are already full health. When the vending machine produces a piece of candy, you'll have to try twice as hard to get the next one but technically there is no limit.

Tips below, but they are spoilery!

Really cool little game Jere. I think right now the main 'difficulty' is just figuring out how the whole system works. Once I got that down it was fun, if a little too easy, to come up with some game breaking combos.  Obviously it's a 7drl so I can't be too harsh in that regard. ;)

A few pointers regarding possible uncheesing that you're probably already aware of:

Anyway, I thoroughly enjoyed the quest for infinite candy.  But now. with it's saccharin taste lingering in my mouth, surrounded by all my new monster friends (and dear old Rosie of course) I still can't help feeling that there must be something more to life than this...

Hippasus, right you are! I realized that Spell Wheel wasn't hard enough to hold interest for long and I considered several modifications that would extend the play time. Most of the feedback I got was that it was simply too difficult though. Very few people would say too easy. So I held off on updating it and haven't had much time lately anyway.

My ideas in case you are curious:

Reviewing this again, I worry that new players would think the game is even more impossible. More tutorializing might help though.

Thanks for the feedback!

You might add a prompt that tells you that you have to press space to start ... I spent some time clicking the nice swinging logo with nothing happening, trying this out in Firefox and Edge :D .

High score: 0. I'm terrible at this game -- it's more difficult than I usually like -- but I think the concept is really interesting. I wish it was easier at the start so I could get farther into the game to experiment more with different spell wheel configurations. Animation and graphics are really great.

Hover tips on each spell power would be a great thing to add; I found myself constantly referencing the list down below and trying to interpret the icons (dagger = damage I assume?).

Thanks for the feedback! I will try to incorporate some of that if I put out an update. As always, it's super hard to balance these things. I was actually considering making it much harder because I find it way too easy as the developer. A few tips:

Very nice game design! The thing with the spell-wheel works quite well. This time I died on my third run in level 4 still with a score of 0. What do I have to do in order to obtain any points?

You can get score from candy which comes out of vending machines, but only when you're already full health.

Great game!  My high score is 1 after 6 runs but i'm starting to get the hang of it. 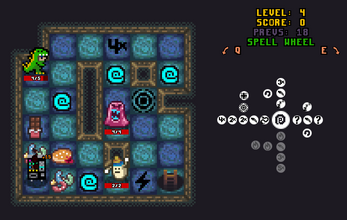